The Final Week of the Internship 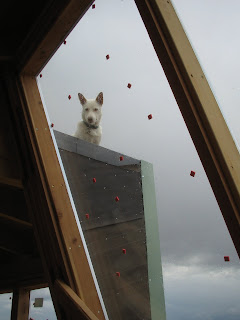 Oh, the last week, so sadly it came.

We started the week off trying to work on the roof, but everytime we got up there, a rain shower came and ran us off. One day hail showed up, so we grabbed our tools, covered our heads and ran. Once inside, we began digging trenches for the planters. Here is a pic of Honey on the roof wondering why we all went inside. 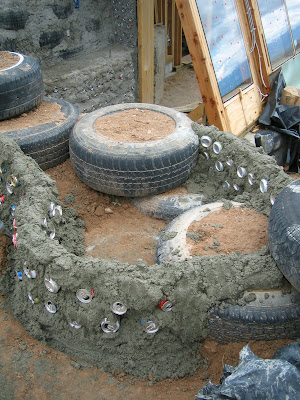 Here you can see Tim was building a step out of cans and tires in order to create a landing in the path up the tire steps. First he builds the can walls to make a perimeter of the area, then he begins to fill in with mixture of concrete and stones. The stones are used as filler so not as much concrete has to be used. 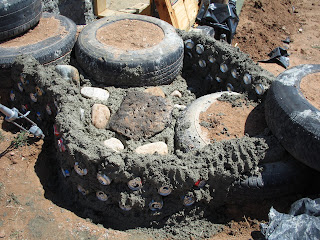 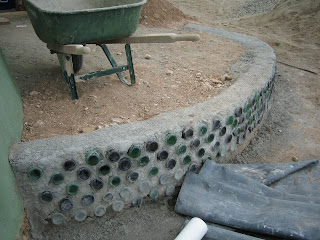 I failed to get a shot of the finished step, but here is a larger one coming out of the Euro.

Speaking of the Euro, on Thursday everyone moved to the Euro to help the crew get a good push on the project. Here is Seth and the girls playing in the dirt. The planter is massive and runs the entire length of the building. 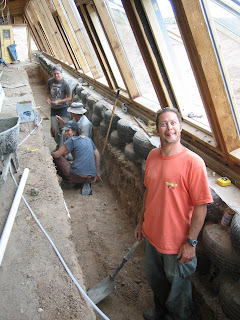 I was put in the back with Ted, Navy Mike, and Ben. Our mission was to bury the three large, 1500 gallon water tanks with dirt.
In between the tanks and the building was a 10' deep trench which needed to be filled first. I began hauling dirt with a 10 gallon bucket from the front of the pile. We realized this would take weeks to fill this way, so Ted got on the dozer and began pushing dirt up to us, as we shoveled it over the tanks.
We didn't end up getting it all done, but we did get most of it done. 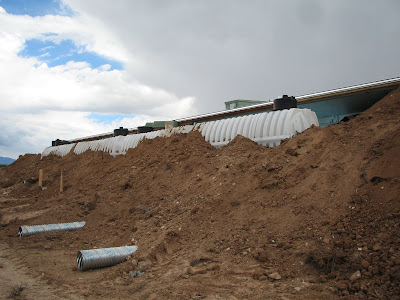 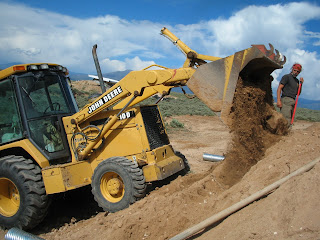 
On our final day of the internship, I finally pounded my first tire. Little Ben from Louisiana taught me how. We did the best we could on the garden wall, but we were completely distracted by the film crew in the distance. That and Navy Mike continually yelling down from the roof, "Don't look into the camera!" "Cut! Cut!" 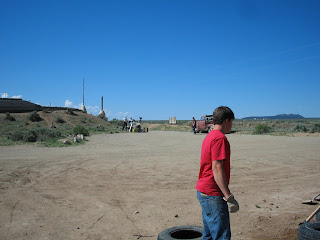 The rest of the crew worked on the roof while Ted was away playing movie star. It was finally a rainfree day and they were able to get most of it done.
What a view ! I hope these guys know how lucky they are! 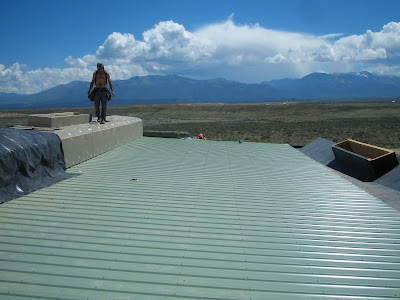 Well, this ends the blog about my internship with Earthship Biotecture.
It was an amazing experience.
Since it wasn't all work and no play, I will post a blog to show the fun we had.
Posted by Jana at 3:14 AM