I have completed my first week of the internship and it is amazing! I am also amazingly soar, but it feels good. My arms are beginning to get some definition to them!
The first day we got a tour of the Earthship Community and saw some new things being built as well as some beautiful, finished residences. The "mothership" of all Earthships is the Phoenix. It is a maze of gardens and rooms with few walls. Spaces are divided by planters filled with veggies and banana trees. At the front of the house, there is a dinning area surrounded by a pond. What a lovely place to eat! 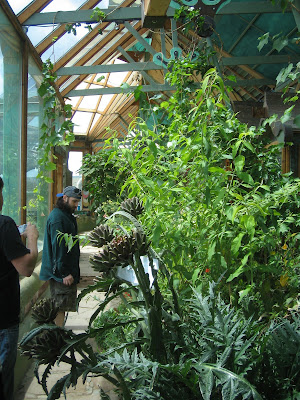 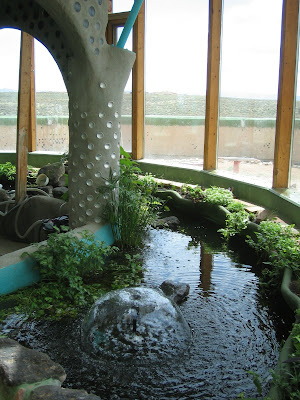 On to the job site: I chose to work on the new visitor's center which will also serve as an educational facility. While working on the job site, I have been amazed at how many people pass by and stop to visit. The most amazing thing is the crew. They are more than happy to stop working, invite the general public onto the site, and answer any questions. It is such an open environment. Mike Reynolds, the creator and architect of the earthships, is always on site, pounding tires, and giving advice.
Here is a picture of the visitor's I have been working on. This is the entrance for which I have been helping build an archway. You can see the rebar arches have already been embedded in a concrete footing. Also, notice the tire wall beyond has not been plastered over, while the one in the foreground have been plastered over. 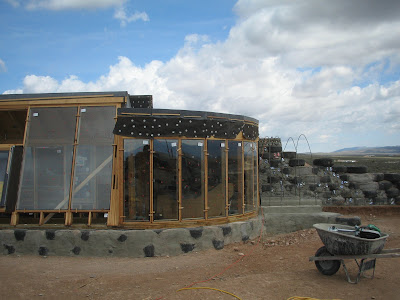 Here is the archway with all the cross bars and lath added. For two days, I twisted wire and added rebar and lath in order to help form the structure. 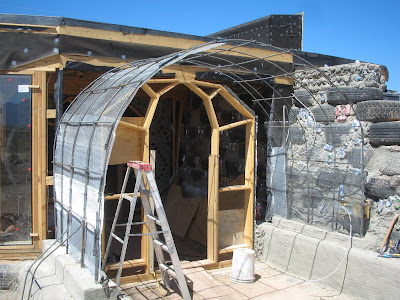 This is Tim, the boss man and the plaster expert. Here we have started to put the cement mixture over the lath. My job is the help mix the cement and shovel mud up to him. 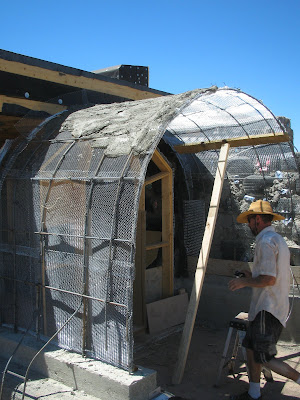 By Friday, Tim had finally plastered two layers of cement mixture over the lath and began to form a shape of the arch. It was a messy job, slapping mud upside down on the inside of the archway. 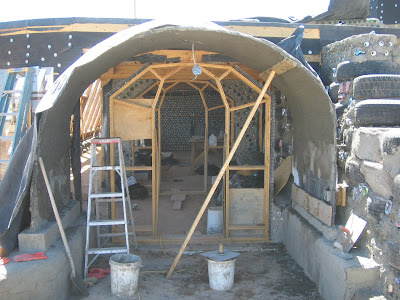 I am happy to have the weekend off! All of the interns are traveling with Mike and most of the crew down to Nogal, NM for the start of a new earthship. I am staying behind to help Tim, Ted, and the rest of the new visitor's center crew.
More later,....